Core -The purpose of the core is to prevent wave transmission into harbour; hence the core material is not too coarse.

Toe -The Toe functions as the foundation for the armour layer. It also may catch armour units displaced from armour layer; The Toe is normally constructed of large stones of quarry run or the most coarse filter layer.

Filter layer -The objective of the filter layer (under layer) is to prevent the core material from being washed out through armour layer. It is built of quarry run.

Armour layer -The purpose of armour layer is to protect the core from direct wave attacks by the dissipation of wave energy. Armour layers are built of large rocks or larger concrete armour units.

There are various types of concrete armour units, that are currently been used for the construction of marine structures. Throughout the past few decades various types and shapes of primary armour units have been invented and used in the construction industry. These have the advantage of being interlocked with high permeability and porosity as armour layer, which make them more stable and more effective in dissipating wave energy. Figure below show some of the concrete armour units that are been used in the current construction Industry.

Different types of armour units have been invented throughout the past few decades, and they too have been undergone evolution. Out of the following we have selected three primary armour units that have been used from time to time for a simple comparison.
Cube 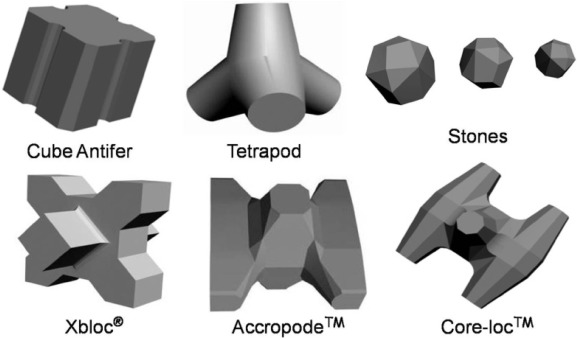 Type of Armour in construction

This site uses Akismet to reduce spam. Learn how your comment data is processed.